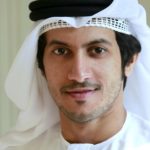 He Joined the Ministry of Economy in 2003. In 2006, he was appointed the Director of trade agreements and World Trade Organization department. In 2009 he was appointed as the Executive Director of Foreign Trade Affairs at Ministry of Foreign Trade. He participated in a number of ministerial and international trade conferences as well as in a number of specialized courses and workshops in the field of trade negotiations.

He holds a bachelor degree in Business Information Technology from the Higher Colleges of Technology, and holds an executive diploma in trade policies from the WTO “Geneva”. He graduated from the UAE Government Leaders Program “Executive Leadership Category” 2010-2011.

He supervised the preparation and completion of the first, second and third Trade Policy Review of the United Arab Emirates which was conducted by the WTO in 2006, 2012 and 2016. He is the Vice-Chairman of the UAE trade negotiating team of free trade agreements, the head of the Gulf cooperation Council (GCC) team on negotiations of free trade agreements in areas of trade in services and investment.