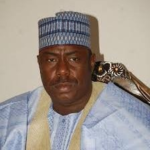 Hon. Shehuri was born on July 4th, 1961. He attended Gamboru Primary School, Maiduguri and Government Secondary School, Damagun, Borno State. He graduated from the University of Maiduguri in 2007 with a Bachelor of Science Degree in Sociology and Anthropology. Honourable Shehuri served as a Councilor representing the Lamisula/ Jabbamari Ward of Maiduguri Metropolitan under the old non-party electoral system from 1996 to 1997.He also served as Council Chairman of Maiduguri Metropolitan Council under the defunct Grassroots Democratic Movement (GDM) from 1997 to 1998. Between 1999 and 2003, Hon. Shehuri was a member of the State House of assembly, representing the Maiduguri Metropolitan State Constituency on the platform of the defunct All Peoples Party (APP). He was a member of the House of Representatives from 2007 to 2011, representing the Maiduguri Metropolitan Federal Constituency on the platform of the defunct ANPP. Hon. Mustapha Baba Shehuri is the immediate past Minister of State for Works, Power and Housing between 2015 to 2019 and he is the current Minister of State, Federal Ministry of Agriculture and Rural Development.