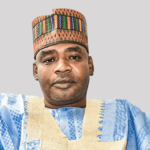 Born on October13, 1972 and at just 45 years, Dr. Kabir Abiso has five academic laurels to his credit, among which is a doctorate degree in Entrepreneurship Management from Oxford University, Namibia. He is also a holder of two Masters Degrees in ICT and Business Administration/Management, a Bachelor of Science in Economics, as well as National and Higher National Diplomas in Town and Regional and Urban and Regional Planning respectively.

No honour would be too much for this rote model and entrepreneur, one of the few pride the nation could showcase to the world in amidst consistent negatives that the few had forcedonthe rest.

He did a change of cadre to assume the position of Deputy Treasurer of Magumeri Local Government in 2014. He was appointed to serve as Chairman of Recovery Committee on Revenue and Treasury Receipt from Jan 2006. After completing the assignment, Abiso was deployed to Bama Local Government as Deputy Treasurer. He was the Secretary of Task Force Committee on Revenue from June 2007 until when he went to further his studies. Upon return, he assumed the position of Treasurer in Gwoza Local Government Council from June 2011 to Feb 2013.

Without doubt, each time the success story of the Buhari Administration would be weighed in line with the patriotic citizens whose vision worked in agreement with the passion and the vision of that government, Dr. Kabir Abiso’s name would be boldly etched in gold.