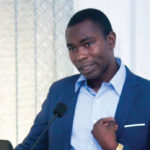 Azeez Oluwole Saheed is very passionate about agriculture. He started his life as a farm boy in a small garden where his father grew vegetables and fruits. This experience became the foundation for his passion for agriculture.

In 1991, young Oluwole became an aquaculture apprentice under his brother where he gained practical knowledge and experience on fresh fish aquaculture. He also made his first investment into that agricultural field in 2001.

Trained as a chemist, Oluwole built a career as a versatile military officer of the Nigerian Navy and a maritime security specialist. He believes that a fundamental factor to world peace and maritime safety is food security. Consequently, he decided to turn his guns to ploughs, convinced that food security will promote peace that warships and missiles can not. As a result, he voluntarily resigned his presidential commission to turn his passion into a mission.

This mission gave birth to FarmKonnect Nigeria, a side project in 2016 with a ridiculously meagre seed investment of 30,000 Naira ($200). The project later grew into a company which attracted investments from friends and colleagues.

After two years of concept testing and foundation building, FarmKonnect became the first crowd funded agricultural real estate company in Nigeria. In aquaculture, the company boasts of 1.2 Million kilogram of catfish and Pangasius per annum in output. In same vein, FarmKonnect (in partnership with touchstone snails technology limited) is building Africa’s biggest snail farm with an estimated output capacity of 2,600 metric tons of snail and 390,000 liters of slime per annum, putting Nigeria at the fore front in snail farming.

Similarly, in partnership with various Dutch and Indian companies, FarmKonnect is also building 2 Million square meters of low-tech, environment-friendly, fruit and leafy vegetable greenhouses in two regions of Nigeria. These will have an output of 240,000 Metric tons of vegetables per annum.

In the coming years, FarmKonnect will be investing more in mushroom, algae ostriches and rabbits.

Oluwole is an agribusiness builder, energetic, passionate, and daring. He has grown FarmKonnect with nothing, from a 200-dollar hobby in 2016 to exceeding its One Million Dollar Mark within one year, even before the official launch of the Company’s operation. Oluwole is a perpetual opportunity creator, and strives to create opportunities for investors in the agricultural industry.

Azeez Oluwole Saheed is the founder and Chief Marketing Officer of FarmKonnect Nigeria.